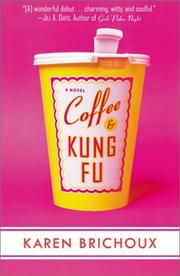 Newcomer Brichoux scores a coup by venturing into the cliché-strewn, warmed-over waters of Gen-X chick-lit and coming up with a bright, fresh, exciting new spin on the genre. This time, the mid-20s woman awash in neuroses and self-doubt is Nicci Bradford, who (get this) doesn’t live in New York or London and doesn’t work in publishing. Disgruntled with her graphic work at a Boston ad firm, Nicci consoles herself with brewing the perfect pot of jasmine tea and watching classic, rare, kung fu flicks, the highly moral, extremely low-budgeted operatic action comedies from which she gains most of her insights into life. The wry, endearing and rootless daughter of overseas missionaries (she was raised mostly in the Philippines), Nicci’s not quite a tomboy, but she’s not far from it and has no white-knight delusions about her future. For most of the story, there’s not even a shoulder for her to cry on because her best friend Carol thinks Nicci was hitting on Carol’s husband (in truth, the guy was coming on to her and Nicci had to knee him in the groin—the only shaolin-style karate, sadly, she’s called upon to do in the book). Nicci’s got a new boyfriend, the rich, confident Rob, who pleases her to no end in bed (and on his yacht) but has next to nothing to talk with her about, and she finds herself fantasizing more and more about that quiet guy who works at the coffeeshop. While Brichoux knows the chick-lit conventions (just as Nicci knows and worships the conventions of the chopsocky genre), the last fourth of the tale breaks free of them and allows Nicci to restart her life on her own terms.

Warm, smart, and original: a swift Snake in Eagle’s Shadow kick to all the Bridget Jones clones.