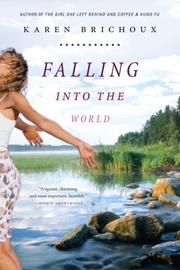 FALLING INTO THE WORLD

Good girl from rural Missouri tries to deal with family crisis and nasty mother-in-law. There’s little doubt as to who will win out in the end.

Augustina Fletcher was well on her way out of the burg of Stoic, Mo., one of those fly-buzzed hamlets with an improbable name and a humble air, when a family situation intervened. The graduate degree from Johns Hopkins would have to wait; Augustina moved home after a car accident killed her mother and put her father, a well-respected Methodist minister, in a wheelchair. Some years later, Augustina is engaged to a lawyer from a good Stoic family, but marrying him means acquiring a shrewish and domineering witch of a mother-in-law who’s about one snide remark away from provoking justifiable homicide. The added fuel that brings this simmering pot to a boil is the surprise return of Augustina’s sister Saphi. A classic professional ne’er-do-well, Saphi hits all of her overachieving sibling’s buttons with relentless force, including the few that their well-meaning father hasn’t been hitting himself. The author slowly, carefully delineates the full extent of Augustina’s disappointment at her now-limited life and her inability to fill her mother’s shoes at church. Disappointed or not, Augustina is always a woman to respect. Unfortunately, the story lacks energy, especially when compared to the brash courageousness of the author’s debut, Coffee and Kung Fu (2003). Readers may well be taken with Augustina, not to mention her salty and appealing father, but the story can only drag to its close.

Fine writing and an eye for character can’t make up for this small-scale, small-town drama’s critical lack of purpose.