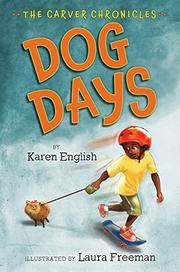 From the Carver Chronicles series, volume 1

A gentle voice and familiar pitfalls characterize this tale of a boy navigating the risky road to responsibility.

Gavin is new to his neighborhood and Carver Elementary. He likes his new friend, Richard, and has a typically contentious relationship with his older sister, Danielle. When Gavin’s desire to impress Richard sets off a disastrous chain of events, the boy struggles to evade responsibility for his actions. “After all, it isn’t his fault that Danielle’s snow globe got broken. Sure, he shouldn’t have been in her room—but then, she shouldn’t be keeping candy in her room to tempt him. Anybody would be tempted. Anybody!” opines Gavin once he learns the punishment for his crime. While Gavin has a charming Everyboy quality, and his aversion to Aunt Myrtle’s yapping little dog rings true, little about Gavin distinguishes him from other trouble-prone protagonists. He is, regrettably, forgettable. Coretta Scott King Honor winner English (Francie, 1999) is a teacher whose storytelling usually benefits from her day job. Unfortunately, the pizzazz of classroom chaos is largely absent from this series opener.

This outing lacks the sophistication of such category standards as Clementine; here’s hoping English amps things up for subsequent volumes.