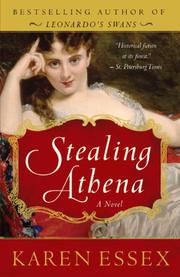 In her fourth historical novel, Essex (Leonardo’s Swans, 2006, etc.) alternates the stories of two influential women, a Greek courtesan and a Scottish heiress, who each played a crucial role in the history of artifacts from Athens’s Golden Age.

In 1799, wealthy Mary Nisbet and her new husband, the dashing but penniless earl of Elgin, journey to Constantinople, capital of the Ottoman Empire. Posted there as British ambassador, Elgin has an all-consuming ambition to secure the priceless marble sculptures adorning the Acropolis in Ottoman-ruled Athens before they are dismantled to make bricks or pulverized to extract lead for Turkish bullets. Strapped from keeping Napoleon at bay, the British government won’t finance Elgin’s ambassadorial or archeological endeavors, so the fiscal burden falls on Mary. A parallel tale set during the 30-year truce that preceded the Peloponnesian War follows Aspasia, the philosopher-courtesan beloved of Athens’s de facto dictator, Pericles, and an outspoken critic of the oppression of women in a city-state supposedly founded by the goddess Athena. Ponderous sections devoted to the logistics of creating and removing the marbles slow down what is otherwise a briskly entertaining narrative. Educated and spirited, Mary is an exemplary wife who endangers her delicate health with multiple pregnancies, underwrites Elgin’s profligate spending and charms the Turks into sanctioning his looting of the Parthenon and other Greek monuments. Aspasia reluctantly permits Pheidias, sculptor of the marbles, to model his colossus of Athena after her. No good deed goes unpunished, Mary and Aspasia learn, for women who forget their place. After Mary is finally estranged by Elgin’s selfishness and financial demands, English law allows him to trash her reputation in divorce court and take her children. Aspasia is publicly tried on trumped-up charges of blasphemy and licentiousness. Both triumph—though Mary pays a heavy price—thanks to their own grit as well as the help of powerful male defenders.

A lively exposé of double standards in two societies that prided themselves on democratic ideals and respect for women.