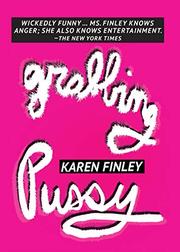 The controversial performance artist and social commentator indulges in a Trump-bashing frenzy.

Finley (The Reality Shows, 2011, etc.) finds her ultimate target in the current president. This amalgam of creative prose and freestyle poetry floods vitriol on the words and actions of Trump. Like in some of her previous works—e.g. George and Martha, her burlesque of a love affair between George Bush and Martha Stewart—the author attempts to transmogrify a bottomless liberal rage into moving, provocative, and occasionally hilarious art. Most pieces approximate Finley’s real-time experience of watching the debates, the 2016 election, Trump's inauguration and Cabinet appointments, and the seemingly endless scandals besetting American politics, and most chapters feature the author’s stream-of-consciousness conversation with herself. Other sections explore alternative narrative forms and inhabit the voices of key players, including Trump himself, pointedly sinking to his level in a satiric travesty of his political debate foibles that derails into ad hominem attacks and inverted objectifications of the male body, eventually erupting in a lively six-page roster of demeaning euphemisms for the penis (highlights include “Mighty Mouse” and “Dr. Peeper”). Recurring sections inhabit Hillary Clinton’s inner monologue and imaginatively re-create private content like the string of in-house emails (or “emales”) devoted to policing Clinton’s supposed lack of femininity and fashion sense. Finley’s signature shock value registers as rather less extreme in the present media climate, and her comedy elicits little engagement beyond a mirthless laugh at the edge of bitter despair. The poems distinguish themselves from the freestyle prose (just barely) due to their greater reliance on sound and rhythmic intonations of vengeful vituperation. One imagines these pieces playing better at a spoken word slam or a Moth performance than in print, but as with the recent retrospective of her collected works, Finley seems determined to transmit and to get on the record just how much she truly abhors this president and everything he supports.

Unsparing, hate-fueled diatribes serving as an implicit rebuttal of the “kill ’em with kindness” approach.