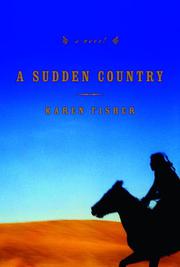 A first-time novelist turns her own family’s past into a vigorous, deeply moving work of historical fiction.

It begins in a snowstorm. A man named James MacLaren rides horseback, cradling his last living child, trying to keep her breathing. By the time she dies of smallpox, he’s mad with grief and burning with fever himself. Meanwhile, the novel’s second protagonist, Lucy Mitchell, has just given birth to a baby girl. It’s 1846. Thousands of people are moving west, leaving the United States for new opportunities and imagined riches in the Oregon Territory. When Lucy’s husband gets “Oregon fever,” he sells their house in Iowa, packs his family in wagons and joins the migration. Few American archetypes are as beloved and clichéd as the pioneer, but Fisher’s settlers are vivid and particular. Brave and naïve, generous and cruel, canny and ignorant: They are real, and Fisher manages to make the familiar story of their westward movement strange. She shows us people who are not just traveling to a new world, but creating it as they go, shedding the “civilization” they have known like the too-heavy luxuries they abandon along the trail. Fisher also shows us worlds that are disappearing as Americans crowd the frontier and “settle” the wild places, worlds that have been James MacLaren’s home. A trader for the Hudson’s Bay Company, MacLaren has spent his whole adult life mapping the uncharted depths of the continent. He meets Lucy after his daughter dies, as he’s searching for his Nez Perce wife and the man she ran off with. When MacLaren signs on as driver and guide for the Mitchell family, his story becomes intertwined with Lucy’s. Their slowly unfolding relationship is doomed but lovely, and as they negotiate this shared grace, they also discover unknown aspects of themselves. Their parting is inevitable, but they part stronger and wiser—flawed, but noble, exemplars of their moment in history.

Elegantly written and powerfully original: a magnificent story and a remarkable debut.