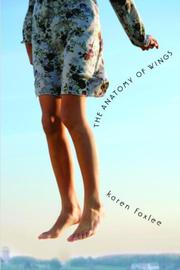 THE ANATOMY OF WINGS

Foxlee’s debut novel (published in Australia in 2007) seeks answers to a sister’s meaningless downfall and death on the cusp of adulthood. Narrated by an adult Jenny channeling her ten-year-old self, the novel arcs from her older sister’s funeral back through the preceding year in their small Australian mining town and ends with the eventual, hope-filled beginnings of healing. Jenny’s exploration is partially about Beth’s life (sexual awakening, drinking, cigarettes) and partially her own search for her singing voice which has disappeared, clearly in response to the fracturing of her family. Whether Beth truly saw angels or thought sex would mend broken men remains unclear; Jenny’s perspective means she fills in the blanks of her sister’s life, as anyone must after a loss. Elegant, evocative writing set this apart from the rash of recent and forthcoming dead-sibling stories, but the young narrator, unfamiliar Australian terms and seemingly unnecessary recent-past setting (1983) will make this a hard sell to nearly any teen reader—although adult readers will rejoice in its elegiac beauty. (Historical fiction. 14 & up)