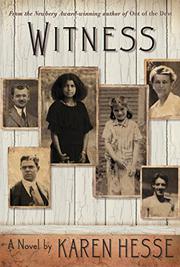 In this stunning piece of little-known American history, Hesse (Stowaway, 2000, etc.) paints small-town Vermont on the brink of self-destruction circa 1924. The narrative poetry format has fitting roots in “The Spoon River Anthology.” Eleven characters speak revealingly for themselves to describe a year in which the Ku Klux Klan arrives, seduces many solid citizens, moves from intimidation to threat to violence, and is finally rejected by the tolerant, no-nonsense townsfolk. Central to the story are two children, one an African-American named Leanora, and the other, a Jewish fresh-air child from New York, named Esther. As targets of prejudice, the lives of both are affected by the actions of the KKK: Leanora is the victim of racist remarks and threats, and Esther sees her father shot while she’s sitting on his lap. The story is all the more haunting for its exquisite balance of complex and intersecting points of view on gender, ethnicity, politics, religion, and money. The setting is well developed through subtly embedded period details of everyday Vermont life (a broom sale creates a stampede) and incidents of national historical significance (the Leopold and Loeb trial). The voices of each character have a distinct resonance, but the voice of Esther, the moral center of the book, is memorable. It has a unique beauty and style created by Esther’s innocent and hopeful way of expression, but revealing of her immigrant roots in New York. This is carefully crafted, with Leanora, who evolves and grows in wisdom and understanding, being given the first and last word. What Copeland created with music, and Hopper created with paint, Hesse deftly and unerringly creates with words: the iconography of Americana, carefully researched, beautifully written, and profoundly honest. (Fiction. 10-14)