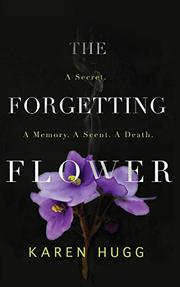 In Hugg’s (Song of the Tree Hollow, 2018) novel, a Polish-born Parisian in financial distress sells an unusual plant’s blooms to very dangerous people.

The death of Alain Tolbert, a possible suicide, greatly saddens his neighbor Renia Baranczka, as he’d been her only friend in Paris. He was also the best customer at Le Sanctuaire, the flower shop that Renia manages. Its owner, Valentina Palomer, regularly dips into the shop’s emergency funds, and the business is perpetually in debt. To solve her problems, Renia turns to an enigmatic plant that her twin sister, Estera, calls “Violet Smoke.” Inhaling the fragrance from its flowers can make a person forget certain events; Estera calls it a “memory trim.” Indeed, the Violet Smoke may be the reason for the siblings’ current estrangement. The plant can be addictive, and Renia fears that it may somehow have led to Alain’s death. But Estera’s unsavory ex-boyfriend, Zbigniew “Zbiggy” Wójcik, is willing to pay handsomely for the flowers. This affords Renia some much-needed funds, but it becomes clear that Zbiggy wants the entire plant for himself. Hugg’s absorbing tale features understated traits from multiple genres. A mystery, for example, plays in the background as periodic flashbacks involving Renia and Estera, who’s not in Paris, gradually explain the twins’ falling-out. In similar fashion, Renia’s increasing involvement with Zbiggy’s unnerving comrades slowly escalates the suspense. The characters are as bold as the flowers adorning Le Sanctuaire; police officer Kateb is oddly elusive on specifics regarding Alain’s death while Valentina’s impudence is almost comical. The author’s sublime descriptions further enrich the story: Despite the supernatural Violet Smoke’s apparent unattractiveness, Hugg endearingly notes its “velvety petals” and how its leaves make the mature plant “seem newly born”; at another point, she equates its twisty branches with “a lanky teenager dancing, bending its arms this way and that.”