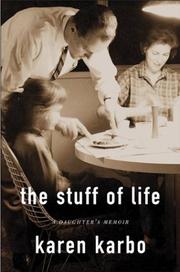 THE STUFF OF LIFE

Wrenchingly sad and remarkably funny account of one woman’s attempt to ease her stiff-upper-lip father through his final illness.

Novelist and nonfiction author Karbo (Generation Ex, 2001, etc.), whose journalism assignments take her diving off Venezuela and to the White House pressroom, is nearly flummoxed by the caregiver role. Having been largely absent as a teenager when her mother was dying of brain cancer, the writer is determined when she learns that her father has lung cancer that things will be different this time. Commuting from her home in Oregon, where she is principal breadwinner for a patchwork family, to his trailer near Boulder City, Nevada, means crossing not just miles but a huge culture gap. Dubbed the Palace of the Golden Sofa by Karbo, her father’s desert home is a triple-wide stocked with Tupperware and guns, including an AK-47. With grit and humor, the author describes the usual maddening encounters with uncommunicative doctors as her extraordinarily stoical father undergoes surgery, radiation, and chemotherapy; she also vividly chronicles his gradual physical decline and, as the cancer reaches his brain, his mental deterioration. Most impressive, though, is Karbo’s willingness to share her feelings, including doubt and guilt: Should she be buying him the cigarettes he still demands? When she prays that his pain will go away, does this mean she really just wants everything to be over and soon? Between stays in the desert, her own hectic life goes on at home as she faces deadlines for magazine assignments, promotes her latest novel, and cares for her own young daughter and her two stepchildren by her husband’s two ex-wives. The contrast between the messy business of living in one household and quiet, slow dying in the other gives this a fine tension.

Karbo’s wit even in the worst of times brightens what could have been just another dreary disease drama.