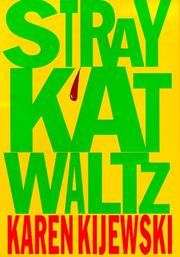 Reeling from the murder of her fiancÇ Hank Parker (Kat Scratch Fever, 1997), Kat Colorado is in no mood to buy into Sara Bernard’s sad tale of sposal abuse. She tells Sara to call the cops and leave her alone. But Sara can’t call the cops, she wails; her husband Jed is a cop; nobody can help her but Kat. Kat insults Sara, hangs up on her, turns her out into the street. When a friend of Sara’s is wrestled from a riverside path into the river and drowned, though, Kat agrees to take the case, meets with Jed Bernard, and hears his version of the marriage (duly seconded by all his friends): Sara’s wild accusations are hysterical, and Jed’s a put-upon husband who likes to coach inner-city basketball games and never raises his voice. Caught between an alleged abuser whom she’s caught stalking his wife, trespassing on her property, and burglarizing her stuff, and her client, a world-class whiner who alternates between tearful reproaches and suspicious disappearing acts, Kat takes a closer look at the Bernards and finds that she can’t trust either of them. So whose story should she believe, and what’s behind the lies she’s getting from at least one of them? The he-said/she-said of Kijewski’s ninth packs as much unfocused intensity as Sara’s complaints, but the lumbering pace and Kat’s gee-whiz undercover work make this less than Kat’s finest hour.