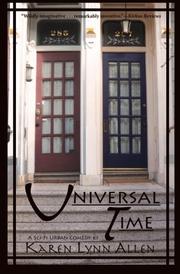 A single mom’s life is turned upside down when she encounters a man from outer space in Allen’s (Beaufort 1849, 2011, etc.) wildly imaginative novel.

Cait has a full plate managing her job at an affordable housing foundation in San Francisco and raising two young daughters, and her ex-husband has an annoying habit of dropping off his new baby for her to watch. One day, a strange man who seems furious with her abducts her on the street, and she’s initially terrified. He introduces himself as Atraxis and says that he believes that she’s in possession of something called a “Tamaranth”—and he wants it back. She’s in his spaceship en route to his home planet of Tivolea when he tells her this, so she can’t exactly tell him he’s crazy. She finally convinces herself that she’s having an elaborate dream; in fact, though, she’s participating in formal Tivolean rituals that result in her getting married to Atraxis. Happily, she’s soon returned to her life on Earth, but her new spouse won’t leave her alone. Instead, he moves into an upstairs apartment and becomes a constant presence in her life. Soon, he offers to help teach her girls, who are learning little at their ineffective school, and even provides Cait with a supercomputer to handle the housework and cooking—all while managing his own job as an arbitrator of interplanetary conflicts. Still, Cait resists his charms and efforts to help at every turn. Luckily, she’s able to turn to her ex-sister-in-law, Nancy, for a dose of sanity—that is, until Nancy becomes smitten with Atraxis’ ex-brother-in-law from an altogether different planet and things really start to get complicated. Allen creates an intricately detailed, remarkably inventive universe encompassing alien languages, physiology, and culture,  as well as advanced technologies. She populates this vivid world with characters that are both layered and believable. Some readers may chafe a bit at the somewhat geeky sci-fi humor (“to her you are as strange as the gas cozzili of Franddon”) as well as Cait’s dogged romantic refusal of Atraxis, even though he’s clearly a catch. That said, most will readily gloss over these minor issues to find out what happens next.

Newcomers to Allen’s work will find this sci-fi-romance to be quite an adventure.