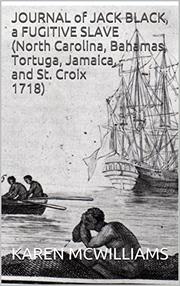 From the Plantations and Pirates series, volume 4

With her brother and a black cat, a young slave escapes her plantation for a seafaring life in this fictional diary.

In this fourth installment of a series, Jackleen—called Jack because of her tomboyishness—begins keeping a diary in June 1718. She lives in the slave quarters on the “Rose Hall Tobacky Plantation” near Bath Town, North Carolina, with her older brother, Samson, and a raggedy, fat black cat called Missus Fluffers. Jack’s parents, Minnie and Sam, were sold long ago. When the children’s grandmother Crazy Ole Gert dies, Jack decides to escape the plantation with Samson (who helps disguise her as a boy for greater safety) and Fluffers, kept snug in a basket. Dodging what seem to be slave catchers, the three wind up aboard Blackbeard’s ship. The famous pirate assigns Jack, Samson, and Fluffers to work as, respectively, cook, cleaner/log boy, and mouse catcher for Capt. Stede Bonnet. But the two men become enemies when Bonnet goes to Bath to sign the king’s pardon. Blackbeard leaves the captain his ship but maroons the crew and sails away. Bent on revenge, Bonnet regains his crew and heads out to sea. As he navigates the Caribbean, Jack and Samson have adventures and meet new people, including historical characters such as Anne Bonny, the female pirate. A happy surprise awaits Jack and Samson before they and their friends settle in St. Croix. McWilliams (Diary of a Black Seminole Girl, Ebony Noel, 2016, etc.) provides additional historical background in a final section. The voice and tone of this enjoyable novel “for ages 8 to adult” are identical to those in the author’s very similar Diary of a Slave Girl, Ruby Jo (2015): bright, happy, and dramatic, emphasized by capitalized words, exclamation points, and colorful language. Although the tragedy of slavery underlies this story—Gert went insane when Minnie and Sam were sold down the river, for example—Jack retains her joie de vivre. And the engaging characters are never in real jeopardy. (Cat lovers will be glad to know that includes Fluffers.) While well-researched, the tale offers a few anachronisms (“cut a rug”) and perhaps minimizes the likely hardships faced by young runaway slaves.

An entertaining and appealing pirate story.