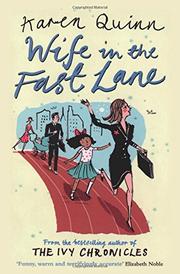 WIFE IN THE FAST LANE

Ex-Olympic sprinter trades life as a CEO for life as a spoiled Manhattan mom.

Christy Hayes cashed in on her fame as a medal-winning Olympic sprinter and founded Baby G sneakers. Now at the helm of a multimillion dollar business, Christy’s inexperience starts to show. The gorgeous runner is a born leader, but lacks the formal schooling and experience necessary to run her organization. Christy’s biggest mistake is placing too much trust in her #2, Katherine. When Christy jets off to Davos to hobnob at a global business conference and perhaps glean some leadership pointers, Katherine stays back in the U.S. to hatch a plot to oust Christy. Unaware of the trouble brewing at home, Christy is star-struck by the leaders who surround her. One night over a magnum of champagne, Christy connects with Michael Drummond, a media mogul. The romantic evening of soul-baring leads to a wedding and the creation of another New York power couple. Michael and Christy vow to stay childless and devote themselves to their marriage and their businesses. Christy was barely able to stay on top of her business before Michael; the responsibilities of married life cause her to blindly leave her company in the hands of her nemesis. As Katherine goes into full attack mode, culling board support to oust Christy, Christy’s beloved maid, Maria, dies. Maria’s last request was for Christy to adopt Maria’s granddaughter. In the blink of an eye, Christy has gone from single to married with children. Christy decides to relinquish her leadership role at Baby G and tend to her family. Thinking her new job will be rewarding, Christy is devastated when she flounders at being a trophy wife and perfect mother. Quinn (The Ivy Chronicles, 2005) tosses everything into this clunker. It’s impossible to relate to any of the deficient, poorly developed characters, and the jumbled plot is tangled with knots.