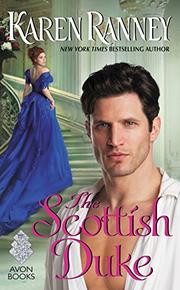 When a straight-laced Scottish duke loses his head and makes love to a mystery woman at a masquerade, he's shocked to find, months later, that he's going to be a father.

The orphaned Lorna Gordon avoids the poorhouse in Victorian Scotland by taking a position as a maid at Blackhall Castle, the seat of the Duke of Kinross. She quickly becomes obsessed with Alexander Russell, the handsome but reserved duke, and attends a fancy dress ball in disguise in order to get his attention. The duke, who never noticed Lorna when she was dressed as a maid, is captivated, and the two end up conceiving a child in the castle’s conservatory. As her pregnancy advances, Lorna must leave her position, but Alex learns of the situation and brings her back to the estate. They marry in haste while Lorna is in labor, making their son the duke’s legal heir. So far, so good—but the plot from here on out is woefully predictable. It's obvious to the reader that Alex has fallen in love with Lorna, but because of betrayals and hurts in his past, it takes him hundreds of pages to realize it. However, this first book in the new Duke Trilogy is saved by Ranney’s (An American in Scotland, 2016) ability to create unusual and complex characters. Alex is an amateur scientist studying fingerprints, while Lorna is a talented illustrator who also knows how to make herbal remedies. Both are charmingly flawed, and both grow during the story. There are also several secondary characters with interesting story arcs, such as the dowager duchess and the maid, Nan, who is a true friend to Lorna.

In spite of the strong characters and engaging writing style, the novel is disappointing because of its lackluster plot.