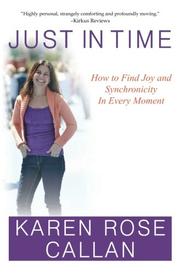 How To Find Joy and Synchronicity In Every Moment

The special bond between a young woman and her exceptional grandmother extends far beyond the grave in this pleasingly metaphysical mashup of self-help manual and memoir.

In life, Callan’s grandma Rose was quite a woman—the kind of vital person who always seemed preternaturally plugged in and fully engaged in the endlessly wondrous world around her. Growing up in the woman’s electric orbit had a profound effect on the author. So much so that when Rose ultimately died at the age of 90, Callan continued to regularly interact with the deceased woman’s spirit in times of both trouble and doubt. “Grandma Rose didn’t waste any time setting up this new form of communication with us,” Callan writes. “She wanted to let everyone know right away, in as theatrical an approach as possible, that yes, she’s still here.” Featuring cozy vignettes of life with the author’s Broadway-loving grandma, each chapter concludes with examples of those otherworldly occurrences. Dinner plates suddenly crash, and songs containing particularly trenchant lyrics play at opportune times. As a yoga practitioner—as her grandmother was before her—the author is finely tuned to Eastern philosophy, so it’s not surprising that she excels in interpreting her warm, familial memories of both her grandmother and grandfather within a spiritual framework. In every recalled interaction with Rose, Callan finds New-Age lessons of mindfulness, self-determination, impermanence and the like. Those unaccustomed to such concepts, however, will still find plenty of other points of connection throughout this highly readable reminiscence of Grandma Rose. Take, for example, the charming story of how the author’s family once took on San Francisco’s famed Lombard Street in a 1968 Dodge Monaco dubbed “The Boat,” which should be enough to put a smile on the reader’s face. Whether the paranormal experiences are interpreted as truly supernatural or merely wishful thinking, they succeed in serving as profound testaments to the enduring power of familial love.