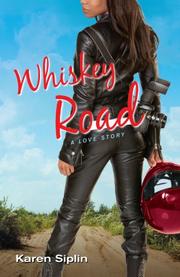 An improbable romance blossoms between a black paparazzo and a white working-class man in the latest from Siplin (His Insignificant Other, 2002, etc.).

Our heroine is spunky Jimi Anne Hamilton, a successful celebrity stalker whose hard-to-get shots of stars in disrepute earn her six-figure bounties. She’s the kind of character telegraphed as “wild” because she dyes her hair and wears leather pants. Fleeing Hollywood after a legally risky car crash that nets her a high-demand photo, she’s convinced it’s time to get out of her increasingly dangerous profession. Unfortunately, disaster strikes during her road trip back home to Brooklyn when she loses all her hard-earned cash and her motorcycle during a robbery in rural Pennsylvania. The reasons behind the mysterious attack on Jimi are confusing at best. Moreover, they’re tangential to the real story: Jimi’s relationship with Caleb Atwood, a soft-spoken “good ol’ boy” with a predilection for motorcycles, John Lee Hooker and simmering violence, whose baggage includes an estranged wife and a loveless affair with a friend’s wife. Plenty of shortcomings trip up the story, including Siplin’s unsophisticated and implausible narrative, characters straight out of central casting and soap-operatic dialogue. Despite these problems, there remains a certain naïve charm to rough-hewn Caleb and mistrustful Jimi, who finds herself attracted to a man completely outside of her experience.

A serviceable love story, assuming one can see past the unnecessary subplots involving the lovers’ siblings and the absurdities of Jimi’s existential crisis.