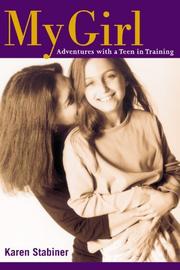 Adventures with a Teen in Training

An optimistic examination of girlhood in contemporary America.

Journalist Stabiner (All Girls, 2002, etc.) was utterly in love with her daughter Sarah. And Sarah was utterly in love back. Then, as Sarah approached her “tween” years, mom and daughter alike began to hear scary prognostications. Sarah would turn into a queen-bee, or a wanna-be, or an Ophelia. She’d get anorexia, start snorting coke, and hate her parents. This is what Stabiner’s friends, and the available parenting-a-tween-or-teen-girl books, predicted. But the author felt that the tween years couldn’t really be that bleak. So she began to take notes about her relationship with her daughter. In her seventh outing, Stabiner insists that the pundits are giving girls a bad rap. She presents a different model, of a mom and a tween who seem to be doing just fine, thank you, and, meanwhile, offers wisdom on topics ranging from cliques to hairdos. But her greatest strength is her way with the language. The descriptions are lyrical and sensuous: “Over the summer they had acquired blond highlights, hairstyles that required not just a blow-dryer but the dexterous use of a round brush . . . and they wore low-rise capri pants on their incipient hips.” While Stabiner claims to chronicle Sarah from 10 to 14, the focus is her sixth-grade year; seventh grade gets a few chapters, eight and ninth a few pages. Had more been devoted to the later tween years, the obvious criticism that of course Sarah was still good and happy might have been avoided: she was only in sixth grade, after all, still practically a baby. The real test will come in an imagined sequel. How will this mom and daughter duo fare during real adolescence? Another frustrating flaw is Stabiner’s unthinking portrait of her considerable affluence. She seems not to realize readers may blink at her descriptions of Sarah’s posh private school, or stumble over the chapter that begins “We had to buy a horse.”

Still, despite its limitations, a funny and very smart read.