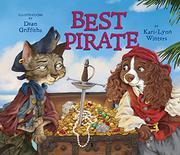 Augusta the spaniel may be the apple of her father Capt. Barnacle Garrick’s eye, but when she sets his treasure map afire, his temper runs short. It’s up to Scully, the captain’s best pirate (a bull terrier), to make Augusta a better buccaneer—but if he doesn’t, he’ll be “marooned on Crossbones Island.” When the clumsy pup manages to injure Scully she sets off to find the treasure they were to seek alone, accidentally trapping herself with a rival pirate, a cat named Scuppers. Treasure they find, but it’ll take Augusta’s insight and skills to get them out of their predicament—together. Following the format she set forth in the book’s two predecessors, Winters once again fills her text with piratical lingo while highlighting three adjectives (in this case, “crafty,” “nimble,” and “fearless”), allowing her heroine to embody them in her own way. Augusta is proactive, takes charge, and even has a thing or two to say about generosity when the moment is right. Griffiths’ illustrations are in fine form here, by turns beautiful in their evocative backgrounds while also displaying an array of impressively expressive kits and pups.