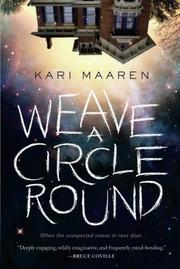 WEAVE A CIRCLE ROUND

A Canadian teenager learns about herself—and the fabric of the universe—when she goes traveling in time with an immortal 14-year-old.

Freddy Duchamp is uncertain where she fits in at high school, especially since her only two friends are about to dump her in a bid for popularity. But her attempt to survive by flying under the radar is utterly torpedoed by her strange new neighbor and classmate, Josiah, who seems determined to provoke attention and anger at every opportunity. Surviving high school soon becomes beside the point when Freddy finds herself traveling in time with Josiah, thanks to Josiah's even weirder housemate, Cuerva Lachance. Josiah and Cuerva Lachance are actually immortal forces representing order and chaos respectively. They're balanced out by an endlessly reincarnating mortal known as Three, who must choose between the other two in each time period. Apparently, either Freddy, her clever younger sister, Mel, or her sullen, geeky stepbrother, Roland, is the incarnation of Three in Freddy's time, but the two immortals aren't certain which of them it is. As Freddy traverses the past and future, she becomes ever more convinced that there's more to Three and the choice than Josiah and Cuerva Lachance are willing to reveal. Time travel is a tricky trope to make consistent, but Maaren employs it deftly. Her teenage characters are incredibly plausible. In contrast, it seems odd that Freddy's mother and stepfather could truly be as absent as they seem; it is possible (and sad), but it mostly feels like yet another trope: in order to have adventures, you have to get the parents out of the way. This debut novel could easily be pigeonholed as YA, and certainly those in that age group will gravitate to it, but adults shouldn't hesitate to dive in, too.

A charming, extraordinarily relatable book with the potential to become a timeless classic.