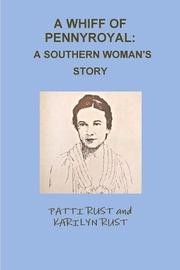 A WHIFF OF PENNYROYAL

Written by Patti Rust in the late 1970s, and recently edited and rewritten by her daughter-in-law, Karilyn Rust, this debut memoir recounts the passionate love story of two damaged souls—one emotionally crippled by circumstance, the other plagued by mental illness.

In October 1919, Patti, 4 years old, was sent to live with the wealthy O’Neill family in Rome, Georgia. Her poverty-stricken, widowed mother had been cajoled into allowing the O’Neills to raise Joy as their own daughter. They changed her name to Patti and instructed her never to admit that she was adopted. Her new father was kind, but Rosa O’Neill was an unloving tyrant, cruel in words and deeds. Patti was given all the upper-class advantages, but Rosa always reminded her that she came from “poor white trash.” During the summer of her freshman year in college, Patti met Harry Rust, from Birmingham, Alabama, and it was as if they instantly completed one another. Two years of inconsistent courtship led to their wedding in 1936. What wasn’t understood at the time was that Harry suffered from undiagnosed bipolar disorder. He was brilliantly creative and adored Patti but was given to fits of despair, hypochondria, selfishness, hours of weeping, and, in later years, violent rages. Patti stood by him through 24 years of marriage until his death at 47, most likely by suicide. The smoothly flowing narrative, as revised by Karilyn to read “more like a novel,” contains extensive dialogue that probably reflects tone and content rather than actual duplication of conversations. Patti’s anger toward Rosa and compassion for Harry ring clear with authentic feeling. Long passages devoted to Harry’s “episodes” and detailed descriptions of every aspect of the ever expanding house they built, the meals served, and the clothing worn grow tedious, but they do offer a visceral image of a privileged, albeit dysfunctional, life in the mid-20th-century deep South. There is also a scathing indictment of the woefully inadequate psychiatric treatment Harry received.

A sometimes-slow tale of remarkable perseverance and devotion that elicits anger and admiration.