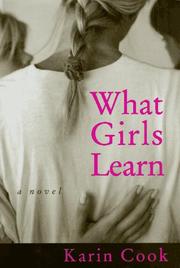 From the Brooklyn-based Cook, an earnest coming-of-age tale featuring two sisters from Atlanta whose mother dies of breast cancer—standard first-novel fare that never provokes, never offends, and never sparks much interest, either. Twelve-year-old Tilden has always been a quiet observer, lingering on the edge of the more vibrant world inhabited by her prettier younger sister, Elizabeth, and by Frances, their optimistic, homily-spouting, divorced mother. When Frances returns home to Atlanta from a wedding up north, Tilden watches anxiously as a flurry of romantic correspondence with a man she met there turns into yet another move. Happily, though, this journey to Nick Olsen's home on Long Island turns out to be a healthy one: Nick, the owner of a limousine service, is a good guy who helps the girls with their homework, cleans up around the house, and works hard to live up to his new role of substitute dad. The girls' adjustment to this new life would appear relatively painless, in fact, if it weren't for Frances's discovery of a lump in her breast, her subsequent mastectomy, and her lingering death over the course of Tilden's 13th year—an event that leaves the two girls with no one to look after them but bumbling Nick. This bomb dropped into the center of Tilden's life might be expected to cause some interesting shock waves, but in fact the adults who surround Tilden and Elizabeth prove so adept at helping the girls adjust to the pain of losing their beloved mother that there's little doubt they'll land on their feet. Even when Frances's no-account brother, Rand, turns up for a visit and makes a half-hearted sexual pass at Tilden, he so deeply regrets his transgression that there's nothing for the reader to sink her teeth into. In the end, this drama remains, like its sturdy heroine, well- intentioned but bland.