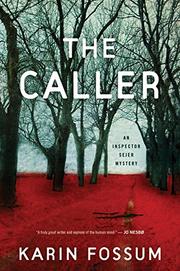 Inspector Konrad Sejer’s latest quarry is a prankster whose pranks are callous, cruel and ultimately lethal.

Lily Sundelin feels magically connected to her baby Margrete, but that doesn’t prevent someone from pouring blood over the little girl as she sleeps in her pram just outside Lily’s kitchen. In short order, some trickster—the same person?—places a premature obituary for Gunilla Mørk, dyes one of Sverre Skarning’s sheep orange, calls the Memento funeral home to come pick up the body of Helge Landmark, ravaged by ALS but very much alive, and summons Evelyn Mold to Central Hospital, where her teenage daughter Frances has not been brought after an accident on her bike. Nor is Sejer himself left out. A note slipped under his door announces: “Hell begins now.” Fossum (Bad Intentions, 2011, etc.), who has little interest in playing whodunit, hints early and often that the jokester is delinquent Johnny Beskow, seething with resentment over his alcoholic mother’s neglect of him, hungry for the love of his grandfather Henry, and determined to harm Henry’s neighbor Else Meiner, who turns out to be one resourceful girl. Instead, the focus is on the frustrated Johnny and the widening circle of calamity he spreads (two of his victims are hospitalized as collateral damage).

As in Ruth Rendell’s books as Barbara Vine, readers are invited to watch helplessly as things go from bad to much, much worse for an unlucky group of basically nice people. If that’s your pleasure, you could hardly do better.