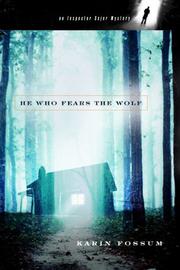 HE WHO FEARS THE WOLF

Farm widow Halldis Horn has kept to herself ever since her husband died, and it’s unthinkable that anyone could have driven a hoe into her brain for the paltry sum in her wallet. But although Officer Robert Gurvin is slow to credit the testimony of troubled schoolboy Kannick Snelligen, Halldis really is lying dead across her front door; her wallet really is missing; and Errki Johrma, a psychotic Finn escaped from a nearby asylum, really was lurking in the farm’s bushes and left his fingerprints inside Halldis’s house. Sejer and his troops are going to have to wait to question him, though, because Errki’s walked into a bank at precisely the wrong time—just a minute or two before Sejer himself, acting on a hunch, stepped in and then out—and got grabbed by Morgan, a robber who thinks his hostage is a mute woman. As the cops scramble to run down the two fugitives, Morgan and Errki eye each other as if they were members of different species. But it’s only a matter of time before Morgan figures out who his captive really is—and before Kannick Snelligen stumbles on the volatile pair.

Less mystifying than Sejer’s English-language debut (Don’t Look Back, 2004), but memorably creepy in its portrayal of a violently mismatched pair of misfits.