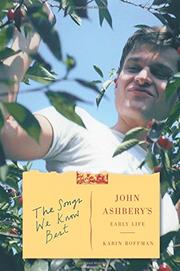 THE SONGS WE KNOW BEST

The first “comprehensive” biography of the American poet’s early years.

Roffman (Humanities/Yale Univ.; From the Modernist Annex: American Women Writers in Museums and Libraries, 2010) met Pulitzer Prize–winning poet John Ashbery (b. 1929) in 2005 at Bard College, and they immediately hit it off. The “vehemently private” poet provided her with an early diary and handwritten and typed manuscripts of poetry, plays, and stories, as well as numerous photographs (included here along with many poems). All of this material, writes Roffman, provides “astonishing record of his earliest creative life.” When the author asked if she could write a biography of these early years, he assumed she “already was.” Roffman delivers a revealing, unprecedented portrait of this artist up to the publication of Some Trees in 1956, which won the Yale Younger Poets Prize, selected by W.H. Auden, narrowly beating out Ashbery’s close friend Frank O’Hara. Born in Rochester, New York, he spent time on the family’s farm and in his beloved grandparents’ home overlooking Lake Ontario. His youth was “ordinary,” and he loved to paint, write, and read. He wrote his first poem at age 8 and read an article about surrealism and Dada in Life that “thrilled him.” As early as kindergarten, Ashbery felt attracted to boys but kept his feelings secret. In 1941, he appeared on the national Quiz Kids show in Chicago. After attending Deerfield Academy in Massachusetts, he went to Harvard. At the time, he said, “I suppose I’ll come out of it intact.” Midway through his college career, Ashbery had ambitious plans to “rip modern poetry wide open!” At Harvard, he met poets O’Hara and Kenneth Koch and immersed himself in the poetry of Wallace Stevens and Marianne Moore. Next came Columbia University and a new, lifelong friend in fellow gay poet/collaborator James Schuyler.

This incisive, groundbreaking portrait of the enigmatic and influential poet will be indispensable to all future biographical work.