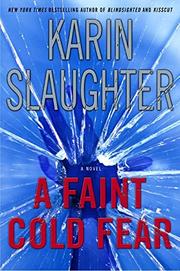 Lena Adams, the cop-turned-security-guard whose twin sister was murdered in the opening scene of Slaughter’s striking debut (Blindsighted, 2001), takes center stage in this third volume.

Readers familiar with the gruesome doings in Grant County, Georgia, may be lulled into a false sense of security when the opening calls pediatrician/medical examiner Sara Linton (Kisscut, 2002) to the scene of nothing worse than the apparent suicide of Andy Rosen, a Grant Tech student who took a header from a bridge. But Sara’s cool examination of the corpse is only the prelude to the real horror that comes when Tessa, the very pregnant sister she’s brought along for the ride, steps into the woods and is savagely attacked by a knife-wielding assailant. As Sara alternates between hovering over Tessa’s hospital bed and listening to her conscientious parents tell her it wasn’t her fault, the investigation explodes in a sequel violent enough to make Lena check out the sex-and-drugs Grant Tech scene on her own, bringing her face to face once more with the nightmare of her abduction and rape—and enough to make Sara think twice about that suicide verdict.

Though the plot tails off in complications that make this the least coherent and satisfying in the series so far, Slaughter keeps baring her living characters’ psychic wounds in scene after scene with a remarkable intensity the reigning postmortem specialists, Patricia Cornwell and Kathy Reichs, can’t match.