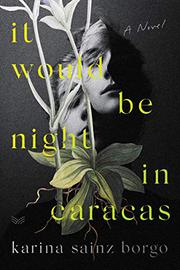 IT WOULD BE NIGHT IN CARACAS

Former Venezuelan journalist Sainz Borgo's fictional debut shows a woman caught in the violent disintegration of her city and homeland at a time of acute personal loss.

Adelaida Falcón's beloved mother has just died of cancer, leaving her alone in the world, and Caracas is going to the dogs. "Everything was disappearing as fast as my mother faded....Everything was ending: our life, our money, our strength. Even the days were now abbreviated. Being in the street at six in the evening was asking to cut your life short." Through a haze of grief, Adelaida watches protesters clashing with the Sons of the Revolution in the streets below. ("Bastards of the Revolution," she thinks.) The air reeks of tear gas and pepper spray. The story alternates between the violent, increasingly desperate present and a happier time when Caracas drew people from all over the globe. ("I was born and raised in a country that took in men and women from other lands. Tailors, bakers, builders, plumbers, shopkeepers, traders.") She remembers visits to an Italian shopkeeper, vacations in the countryside with her mother, songs sung by women hulling maize by hand. Now Venezuelan paper money is worthless, foreign currency outlawed, and rationing so severe that sanitary napkins are "more valuable than toilet paper." Adelaida returns from a failed attempt to buy bread to find she can't open her door. A menacing crew of women black marketeers has taken possession of her apartment. The ringleader, wearing her mother's favorite blouse, laughs when she threatens to call the authorities. Adelaida's subsequent attempts to find safety involve, among other things, a corpse that needs to be disposed of, a friend's brother who was kidnapped by the Sons of the Revolution and is now in hiding, and a brazen, high-stakes gamble with a stolen identity. Sainz Borgo renders the psychological and emotional toll of government collapse with both nuance and authority, thrusting the reader into Adelaida's struggle for existence and the stark choices before her. "We found ourselves wishing ill on the innocent and the executioner alike. We were incapable of differentiating between them."

A propulsively written, harrowing story, as desperate as it is timely.