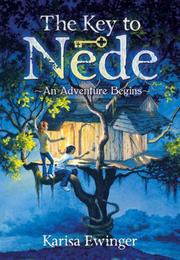 THE KEY TO NEDE

Two children learn about themselves and the worlds around them—both visible and invisible—while on an adventure in the magical Land of Nede.

When 12-year-old Billy moves in to Lovett Manor after his mother goes missing and a fire burns down the building in which he was hiding, he meets Sarah, the niece of Mrs. Lovett. The pair searches for a lock that matches the key that Billy has carried with him for years and finds an agreeable padlock on the tree house in the backyard. Upon entering the tree house, they fall through its rotting floorboards of the tree house and end up not on the ground below but in another layer of reality. They have stumbled upon the invisible Land of Nede. Here they meet Trick, who teaches them what to fear—namely Prince Goth and his minions. They also encounter the royal family, who teach them about the power within themselves and how they can fight evil creatures to make their own reality more like Nede, where everyone lives within the same parameters of wealth, eats for pleasure rather than out of need, and time is no barrier. Billy, as a chosen one, is especially important in the war between the people of Nede and Prince Goth. Once they return to their families, Billy and Sarah strive to keep the lessons of Nede in their hearts and minds as they deal with people already infiltrated by Prince Goth’s army. Ewinger’s writing is clear and concise, though she often resorts to clichés in her descriptions. Also, much of the dialogue consists of long explanations that may not succeed in maintaining the interest of young readers who might suspect they are being exposed to valuable lessons. Children usually learn best when new knowledge is better shrouded in authentic characters and more intricate adventure.

Parents looking for stories that reinforce religious teachings may find much to like, but others may not be captivated by the tepid prose.