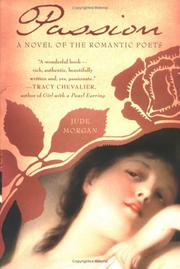 A Novel of the Romantic Poets
by Jude Morgan
BUY NOW FROM
AMAZON
BARNES & NOBLE
GET WEEKLY BOOK RECOMMENDATIONS:

Three iconoclastic British poets—Byron, Keats and Shelley—are viewed through the prism of the women who defied parents, husbands and social norms to be at their sides, from the author of The King’s Touch (2004).

Whether historical or romantic fiction, or a melding of the two, this is a sensational story of money, marriage and, above all, high-wrought emotion. Mary Godwin, beloved daughter of philosopher William Godwin and radical writer Mary Wollstonecraft, is destined for Shelley, the married but discontented free-thinking writer who visits her household. After their elopement, Godwin ostracizes her. Caroline Ponsonby—rich, high-born and high-strung—marries William Lamb but discovers greater excitement as the lover of beautiful, rakish Lord Byron, whose Childe Harold’s Pilgrimage has made him the toast of the town. Byron’s half-sister Augusta marries a ne’er-do-well colonel whose spendthrift ways cause her to turn to Byron for financial help. She too becomes his lover. It is Augusta who then urges Byron to marry Annabella Milbanke, as a means of ending their illicit involvement. But after the birth of a daughter, Annabella separates from Byron, and the resulting scandal—inflamed by obsessive Caroline Lamb’s disclosures—renders Byron a pariah. Ruined, he moves to Switzerland, encountering Shelley and Mary in Geneva. During nights spent together at the Villa Diodati, ghost stories are first read, then invented, inspiring Mary to write Frankenstein. Fanny Brawne and Keats put in a late, short, tragic appearance, their intense love doomed by his tuberculosis. Although engaged, they will never marry. Keats dies in Rome, Shelley drowns in Italy and Byron expires in Greece. Augusta repents, Fanny remembers, Mary returns to her father and raises her one surviving child.

THE SECRET LIFE OF WILLIAM SHAKESPEARE
by Jude Morgan
Fiction