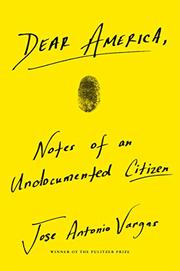 As if to dare the attorney general to come find him, Philippines-born immigrant journalist Vargas, a winner of the Pulitzer Prize, owns up to being “illegal”—but not criminal.

As the author’s account opens and closes, he has been arrested in preparation for a “removal proceeding,” the consequence of his mother’s decision to put him on a plane with a supposed uncle and send him to the promised land of the United States at the age of 12 in 1993. That uncle was a smuggler, and the life Vargas found wasn’t all that it was supposed to be; neither did he have the papers—real ones, anyway—to support things like getting a driver’s license or going to the polls. Given the mood of the nation, which, as the author notes, officially no longer characterizes itself as “a nation of immigrants,” it’s understandable that he is perplexed and worried at his situation, perhaps less intuitively so that he should confess it in a book that almost certainly will not change many minds: Those opposed to immigration, illegal and legal, will dismiss his pleas, and those for it will share his indignation. Of more interest to readers on the middle ground, if there are any, is the author’s account of how few and technically complex the supposed paths for legal immigration are these days—and how easy it is to be deported. Thus he had to wrestle when, having appeared on-air to discuss his plea, he was invited by Nancy Pelosi to be her guest in Congress, an invitation that an immigration-lawyer friend urged him to decline: “It took .25 seconds for the Breitbart website to pull up 725 articles under the search ‘Jose Antonio Vargas.’ Breitbart runs immigration policy in the United States.” Though in fact detained, the author was released and now lives in a kind of legal limbo while waiting to see what, if anything, will happen.

An unusual firsthand report from the immigration wars.

THE MAKING OF A DREAM
by Laura Wides-Muñoz
Nonfiction