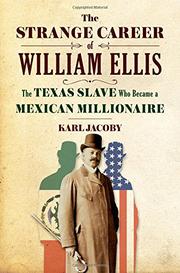 THE STRANGE CAREER OF WILLIAM ELLIS

The Texas Slave Who Became a Mexican Millionaire

A remarkable historical detective story that unearths the life and times of a “trickster” African-American who was able to “pass,” and strive spectacularly, as Latino.

During a time of deep racial anxiety in the United States—just after the Civil War and through the 1920s—the “color bar” was deeply pronounced and enforced in all aspects of society, from travel to public establishments to housing to marriage. Jacoby (History/Columbia Univ.; Shadows at Dawn: An Apache Massacre and the Violence of History, 2008, etc.) delves minutely into this unsettling history of racial relations through the life of nimble businessman William Henry Ellis, aka Guillermo Enrique Eliseo—born in 1864 to biracial slaves in Victoria, Texas—whose olive skin and facility with Spanish allowed him to move freely between the porous U.S.–Mexico border and reinvent himself in an extraordinary manner. Ellis’ ability to pass as Mexican or Cuban (or even Hawaiian) while on business above and below the border is only one facet of this fascinating story. He rode in first-class cars, stayed at length in the British-owned Hotel Gillow in Mexico City, built a trading firm on Wall Street, and married a white woman. Ellis was surely a kind of confidence man, but he was also a crusader for his race and became embroiled in Republican politics in the 1880s, cooking up a scheme to recolonize African-American tenant farmers from the cotton-picking South to a huge tract of land in northern Mexico during a time of profound labor shortages in Mexico, where racial relations were far less fraught than in America. Jacoby imparts important, unknown aspects of Mexican-American history and does a stellar feat of research in weaving together this fragmented life as just one incredible example of the American experience in all its complexity and ingenuity.

An amazing tale that is indeed “almost too strange to be true.”