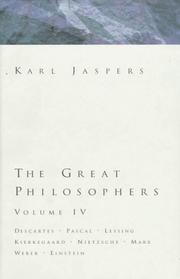 Rigorous yet readable notes, sketches, and articles that round out a four-volume panorama of the philosophical pantheon. The eminent existential philosopher Jaspers (18831969) died before he could complete this work. Editors Ermarth and Ehrlich have, however, been able to stitch together a coherent book that, in accordance with Jaspers's plan, primarily covers the philosophers whom he termed ``the disturbers'': thinkers for whom doubt and despair loomed large. Jaspers opens with a discussion of Descartes. A disturber in the probing style of his thought, he stands apart, however, insofar as he compartmentalized issues of faith and philosophy. The other disturbers Jaspers characterizes as ``great awakeners.'' Working the boundaries between philosophy and theology, they sought to think man back to some sense of completeness. These include Pascal, whose famous wager for the existence of God Jaspers critiques at some length; Kierkegaard, the great philosopher of faith, over whom Jaspers lingers longest; and Nietzsche, discussed briefly in part as a counterpoint to Kierkegaard. Interestingly, Jaspers includes a chapter on the 18th- century theoretician and critic Gotthold Ephraim Lessing, declaring his work to be exemplary for its critical discernment. In a short section on ``philosophers in other realms,'' such as the sciences, Jaspers discusses the philosophical import and the (in his view) severe limits of Einstein's thought. Max Weber, in contrast, elicits unstinting praise. The book closes with an appreciation of Marx that subsumes a harsh critique of the Marxist style of disputation. Jaspers makes information about philosophers' lives and the dissemination of their works integral to his accounts of their ideas. Thus a sense of history and of human contingency pervade these pieces. Twenty-five years after its author's death, this is by no means a cutting-edge work—but this great thinker's ruminations on his predecessors have a timeless quality to them.