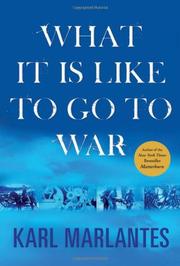 A manual for soldiers or anyone interested in what can happen to mind, body and spirit in the extreme circumstances of war.

Decorated Vietnam veteran Marlantes is also the author of a bestselling novel (Matterhorn, 2010), a Yale graduate and Rhodes scholar. His latest book reflects both his erudition and his battle-hardness, taking readers from the Temple of Mars and Joseph Campbell’s hero’s journey into the hell of combat and its grisly aftermath. That Marlantes has undertaken such a project implies his acceptance of war as a permanent fact of human life. We go to war, he says, “reluctantly and sadly” to eliminate an evil, just as one must kill a mad dog, “because it is a loathsome task that a conscious person sometimes has to do.” He believes volunteers rather than conscripts make the best soldiers, and he accepts that the young, who thrill at adventure and thrive on adrenaline, should be war’s heavy lifters. But apologizing for war is certainly not one of the strengths, or even aims, of the book. Rather, Marlantes seeks to prepare warriors for the psychic wounds they may endure in the name of causes they may not fully comprehend. In doing that, he also seeks to explain to nonsoldiers (particularly policymakers who would send soldiers to war) the violence that war enacts on the whole being. Marlantes believes our modern states fail where “primitive” societies succeeded in preparing warriors for battle and healing their psychic wounds when they return. He proposes the development of rituals to practice during wartime, to solemnly pay tribute to the terrible costs of war as they are exacted, rather than expecting our soldiers to deal with them privately when they leave the service. He believes these rituals, in absolving warriors of the guilt they will and probably should feel for being expected to violate all of the sacred rules of civilization, could help slow the epidemic of post-traumatic stress disorder among veterans.

A valiant effort to explain and make peace with war’s awesome consequences for human beings.