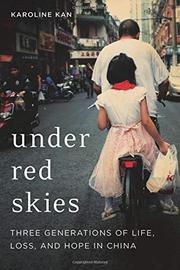 Three Generations of Life, Loss, and Hope in China

A personal examination of rural China and its one-child policy by a millennial Chinese woman who eventually earned an education and employment as a journalist.

A former reporter for the New York Times Beijing Bureau, Kan was born in 1989 in the village of Chaoyang, which was rebuilt after the great Tangshan earthquake of 1976. Since she was her mother’s second child, her birth had to be hidden from the registrars; if the secret was revealed, her poor family of farmers would receive a fine that would be difficult for them to afford. In the end, her strong-willed mother was determined not to abort her. While the cost was considerable—and they had to endure friction with their in-laws and shame within their community—the family moved to a larger neighboring town where, unlike her cousins, she and her brother would have a chance to receive an education. Condemned to live in a tiny apartment crammed next to others, the author was subjected to prejudice about her accent and her looks, but she was able to validate herself through dedicated focus and fervent patriotism as a Young Pioneer. At school, she writes, “the lessons were meant to unify us, by pointing at a shared enemy for all—mainly the British, Japanese, and Americans.” As a child of conservative parents, Kan, who has no problem with candid introspection, also looked to her beloved grandmother Laolao. During her childhood, Laolao just barely escaped having her feet bound and expressed bitterness about her unjust treatment by the government, but she also automatically spouted the clichés about boys being superior to girls, to the author’s dismay. Impressively, Kan beat the odds, managing to steer clear of the ingrained courting rituals and establish herself as a professional journalist.

A remarkable multigenerational memoir that clearly explores “the real China—its beauty and ugliness, the weird and familiar, the joyful and sad, progressive and backward at the same time.”