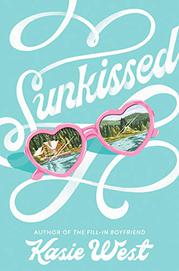 The summer before her senior year, 17-year-old Avery unexpectedly finds romance on a family vacation.

Avery’s family spends their summers away from Los Angeles, enjoying the outdoors; this year it will be two months at a remote resort in the California woods. Her 15-year-old sister, Lauren, an outgoing video blogger, is distraught by the camp’s lack of internet access while go-with-the-flow Avery is just hoping for no drama, upset after having found out her best friend kissed her ex-boyfriend. An initial miscommunication makes things tense with handsome camp staff member Brooks—until Avery agrees to help him write songs for a band competition in exchange for his helping her step out of her comfort zone. Of course, staff aren’t supposed to fraternize with campers, which leads to much sneaking around, though Avery and her sister attend several staff parties thanks to befriending lifeguard Maricela and drummer Kai. Avery learns to find her voice, both metaphorically—she feels her parents don’t take her seriously—and literally, as she must overcome her stage fright when asked to step in for the vocalist in Brooks’ band when they compete in the festival. Avery’s complicated relationship with her family feels underdeveloped, though the love story with Brooks hits all the right notes. Fans of West will enjoy this watered-down Dirty Dancing tale, with its swoony romance and uncomplicated plot. Most characters are White; Maricela is implied Latinx, and Kai is Polynesian.