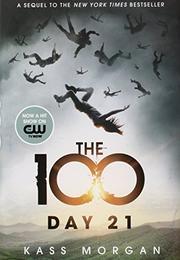 The 100 teenage convicts sent to recolonize Earth (a need more pressing than they know) in The 100 (2013) discover just how inhabited the planet really is.

As in the series opener, the narration is divided among characters. Amid frequent flashbacks, Bellamy, Clarke and Wells struggle through love triangles on Earth, while up in space, Glass updates readers on the colony’s status. The situation’s deteriorating rapidly—they’re running out of oxygen, and the colony doesn’t have enough dropships to take everyone to Earth. Class conflicts among the three ships are highlighted in the subsequent struggle, yet the root of this animosity is still a mystery. On Earth, the survivors of the 100 cope with both the most recent attack by the Earthborn and a mysterious illness—possibly radiation poisoning. The teens capture an Earthborn girl and discover that they aren’t the first colonizers sent. Rather than getting any useful information from the girl (it’s all withheld for last-minute reveals), they waver between wanting to execute her and including her in relationship drama. It’s amazing anything survival-related happens considering the amount of energy spent on characters’ rapidly vacillating feelings toward one another (the dynamic appears to be a binary one: love or loathing). Despite this, the novel is still faster paced than The 100. Additionally, Glass’ storyline speeds up at the conclusion, positioning readers for the next installment.

A logic-light, romance-heavy novel that evidently has no aspirations beyond accompanying the CW series.