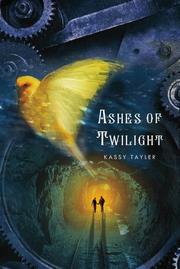 From the Ashes of Twilight series, volume 1

Dystopian future plus steampunk plus romance: All these trendy ingredients are here plopped together in a plodding muddle.

Wren is a shiner, a coal miner whose family has lived in the bowels of the Earth for generations. When a comet threatened the world back in 1878, the royals moved into a city domed in glass, bringing soldiers, servants and a workforce to keep their protected enclave powered. Two centuries have passed, and the world outside is still wreathed in flame—or so Wren has always been taught. But others in her world are convinced there’s a better life. Wren, during a forbidden outing in the domed city above the mines, finds the dying, horribly burned body of her friend Alex, the words “the sky is blue,” on his lips. Now Wren’s on the run from the authorities, hiding away with a dreamy, blue-eyed boy. There’s another boy, of course, but Wren doesn’t want this one, who’s at least partly responsible for the ever-present threat of sexual violence in her world. Wren can save the blue-eyed boy or protect her village; seek the blue sky or find safety in darkness. Maybe she can snuggle in a freezing cave for a long time while she thinks about it.

Successfully evokes the sightless, slow-moving, claustrophobic, ever-present darkness of dystopian coal mines—but is that a victory in a romantic adventure? (Steampunk. 14-16)