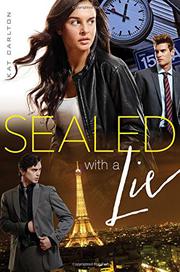 SEALED WITH A LIE

This second installment in a new espionage-action series for girls (Two Lies and a Spy, 2013) provides suspenseful entertainment, although Kari Andrews is no Alex Rider.

The story begins in Paris, where 16-year-old Kari studies at Generation Interpol, training to become a spy like her parents, who turned traitors and abandoned their family in the previous book. Although Kari has real talent in martial arts, it’s difficult to imagine a character less suited to the spy trade. She’s uninterested in and unable to learn languages or the technical aspects of her chosen profession. Throughout the book, Kari shows herself to be a walking bundle of rampant emotions. She can’t control herself even in the most dangerous situations, and her emotional outbursts threaten the success of her mission over and over. Fortunately, handsome Evan keeps her in line, though with some difficulty, by reminding Kari that her little brother Charlie’s life could be lost if she doesn’t calm down. Shadowy enemies have kidnapped the 7-year-old genius, threatening to dismember and then kill him if Kari doesn’t spring a thief from jail. She teams up with Evan and two other friends in a caper that takes the group across Europe and involves a nifty break-in to a highly secure company headquarters.