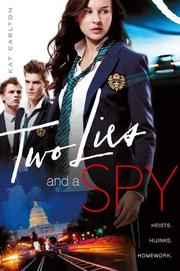 TWO LIES AND A SPY

A spy caper spiced up with teen romance.

Unlike most high school juniors, when Kari Andrews gets a text from her dad to pick up milk after school, she kicks into high gear, recognizing it as a Code Black situation: a family emergency. For Kari, the Code Black text sets in motion a series of choreographed events including making a skillful escape out of a school window, ditching her prep school uniform for a goth-girl disguise, picking up her whip-smart 7-year-old brother, Charlie, and hiding out in a local hotel while they wait for their parents, who are U.S. spies, to arrive. Kari’s parents don’t show, though, so she must attempt to locate them, relying on the help of her friends, who have talents ranging from makeup artist to judo master and parents with high-level government positions. Although the plot is highly reminiscent of the movie Spy Kids, Kari’s narration of events and her feelings, especially those related to her crush, Luke, give the text a fresh and believable tone, facilitating a suspension of disbelief as this band of teens takes on the CIA. Although a setup for future volumes, the novel can stand alone, with a complete story arc and fully fleshed-out characters.

Goes down as easy as popcorn.