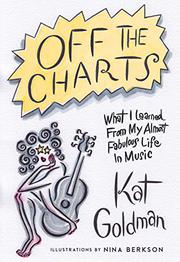 What I Learned From My Almost Fabulous Life in Music

Successful Canadian singer/songwriter Goldman offers a behind-the-scenes look at her life in the music industry.

The author has four albums, three Nashville competition wins, and 12 song placements in TV shows and movies under her belt, so she knows the ups and downs of the music industry—and what’s required to be a true “lifer” in the business. Goldman traces her career from her modest beginnings as a teenage singer in a Grateful Dead cover band to her songwriting successes in Toronto and New York City. She also tells the story behind her most popular 2002 song, “Annabel,” which was inspired by the memory of her grandmother, who died in 1997. Goldman’s narrative serves as a lively and entertaining compendium of music industry wisdom, with chapters featuring Goldman’s guidance on relevant topics, such as “How to Schmooze,” “Be Prepared to Improvise,” and “How Do You Know When You’ve Made It?” The author draws upon her personal journey in a relatable and heartfelt manner, and her anecdotes will educate and entertain readers in equal measure. She grounds her triumphs and tragedies in real-world advice to help readers navigate the complexities of an often mysterious industry. Goldman also pulls no punches regarding career disappointments, the pressure to succeed, and sexism in the music industry. However, readers will find hope in the example of Goldman’s success, which she achieved, in part, by being true to herself. Although the work has moments of gravity, Goldman also offers plenty of lighthearted humor: “Never mock a member of your audience…don’t yell, ‘Nice hairdo!’ at someone, I learned.” Overall, this is an excellent read for anyone interested in the nuts and bolts of the music business, with advice on everything from songwriting to promotion, but it’s also an engaging narrative about self-definition and inner strength. Lively, music-themed black-and-white illustrations by Berkson are also included.

A wild and witty musical memoir.