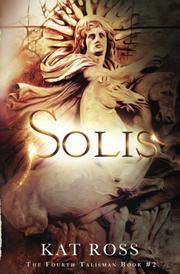 From the Fourth Talisman series, volume 2

In this fantasy sequel set in ancient Persia, Ross (Nocturne, 2017) prepares her heroes to confront a banished tribe of fire-wielding elementals.

Nazafareen, whose parents were a mortal and a magical da?va, is in the city of Delphi. She’s under the protection of Kallisto, leader of the Maenads, a group of “virgin warriors” who fight for the god Dionysius. Kallisto is married to the historian Herodotus, who’s been imprisoned for witchcraft by the Archon Basileus. He faces imminent trial, and standing with him will be Nazafareen’s friend Javid, who was captured by soldiers in the previous installment. To help free them, Nazafareen and the Maenads investigate Kadmos and Serpedon, toadies of the Archon who likely planted forbidden spell dust in the historian’s study. The trial, however, seems to have already been fixed, orchestrated by the High Priestess of the Temple of Apollo; she’s searching for information on four talismans that helped imprison the clan called the Avas Vatras, 1,000 years ago. If the Vatras, da?vas who control fire, escape from the vast desert known as the Kiln, they’ll seek vengeance on the other elemental clans responsible for their imprisonment: the Danai, the Valkirins, and the Marakai. Meanwhile, the blind Valkirin Culach, who’s also in jail, forges a connection via his dreams with Farrumohr, a royal adviser who witnessed the Vatras’ fall. For this dense second volume of the Fourth Talisman series, Ross plots with Olympian vigor, packing her alternate version of Persia with complex characters and a multilayered mythos. Javid, a transgender man, steals numerous scenes as someone who embodies the notion that “life is too short to live as others would have us be.” Meanwhile, Darius, Nazafareen’s love interest, spends half the novel chained in the rooms of Thena, a priestess who intends to break him; when Thena falls in love with the indomitable hero, Ross does what she does best—creating subtle entanglements that intensify other subplots. This volume’s opening dilemma finds resolution, but there’s plenty still in flux to drive readers to an epic third installment.

A complicated follow-up that pushes its cast to the physical and emotional brink.