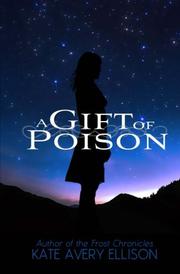 A GIFT OF POISON

From the The Kingmakers' War series, volume 1

A girl who has been dismissed and distrusted for most of her life must prove herself in this quest novel.

Briand Varryda dresses like a boy and is the unwanted ward of her uncle. Denied education and often even food, she realizes that her only friends are her cousin Bran and, sometimes, the soldier Tibus. Briand can look after herself: She’s good with a knife and light on her feet. But this time, she’s in real trouble. Briand has cleaned out one soldier too many at the card game Dubbok. When Tibus saves her from vengeful pursuers, he has no choice but to then turn her over to Kael, steward of her uncle’s castle—who has a reputation for cruelty and who, with the help of Bran’s loathsome tutor, Nath, is conducting secret experiments involving young noblemen and poisonous snakes. Kael gives her one last chance. Briand tries to go straight; she attempts to do the right thing. But when she intervenes in one of Kael’s experiments, she gets more than she bargained for. By passing a test meant for Bran, Briand becomes a “dragonsayer,” with “the ability to speak to and sometimes control animals of magic, particularly dragons.” From despised guttersnipe, she has now risen to being the kingdom’s last hope against the usurper prince and his deadly Seekers—but that’s no reason for her companions to think any better of her. In this short novel, Ellison (With Tide and Tempest, 2014, etc.) takes fantasy tropes and makes them feel original. The same achievement can be seen in characterization. Briand and all the others are easily recognizable types but still seem unique. Briand, in particular, is somehow not the typical orphan who makes good. This is made possible by the author’s no-nonsense prose and pacing and some astute worldbuilding. The necessary background details (with the exception of some that find their way into speech) are foreshadowed rather than dumped. This allows Briand to forge her own path and for the story to grip and take hold. Although this is the first book in a series, the plot is largely self-contained. Readers will be left with closure but still wanting more.