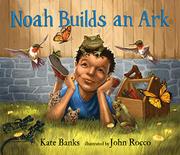 Noah receives a lesson on surviving storms from his family and uses it to give safe passage to the denizens of the family’s backyard.

Salamanders, toads, snakes, hummingbirds, butterflies, field mice, and grasshoppers can all be found in little Noah’s backyard garden. Noah spies the dark clouds hovering over the cityscape as his father declares, “It’s going to be a beauty.” Rather than depict heavy rainstorms as ominous and menacing, Banks and Rocco instead instill the message that the proper preparations can ensure a family’s safety. That logic extends to the backyard. As Noah’s father boards up the windows of their row house, Noah capably repurposes his broken-down wagon into an ark. As Noah’s mother and sister stack groceries and fill water jugs, Noah prepares food for the ark’s creatures. When the rain finally arrives, the family is soothed enough to enjoy board games and share stories by candlelight. Inside the ark, the creatures imaginatively begin to take advantage of one another’s intimate company as well. When the storm finally settles, the creatures exit, two by two of course, back to the tiny, thriving ecosystem of the family’s fenced-in slice of earth. Rocco’s meticulous paintings depict a brown-skinned family carefully preparing for the weather; the animals are not directly anthropomorphized, but compositions give a cozy sense of community.

Bringing the beauty of and responsibility for nature to the city, this will win over readers with its parallel storytelling and appreciation for human- and nonhumankind alike.