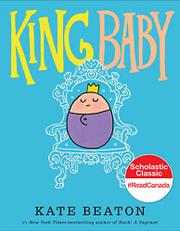 In the first few double-page spreads, the swaddled, white, potato-shaped infant presides over an adoring, diverse crowd of admirers as his proud parents look on. “But your king also has many demands!” reads a later page, and his mother and father patiently meet those demands in illustrations that show them becoming increasingly exhausted. It’s a well-worn theme, reminiscent of Marla Frazee’s Boss Baby (2010), but Beaton keeps her book feeling fresh through humorous illustrations that expand on the wry text and never shy away from exposing the extent of King Baby’s tyranny. As King Baby gets older, he learns to crawl (the sequence showing this achievement is a triumph) and then becomes “a big boy” astride a toddler’s balance bike at the playground. No longer King Baby, the big boy wonders, “But what of these poor subjects? / Who are they, without a king? // And who will lead them if not I?”—and a wholly satisfying conclusion arrives with Queen Baby.