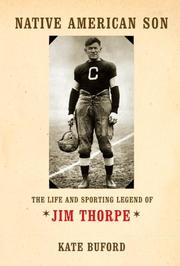 The Life and Sporting Legend of Jim Thorpe

An impeccably researched biography of one of the world’s greatest all-around athletes, a symbol of racial injustice and untapped potential.

This retrospective is not the first to tackle the complex life of Jim Thorpe (1888–1953), but it’s the most comprehensive. From his childhood in Oklahoma to career as a struggling actor a half-century later, journalist and biographer Buford (Burt Lancaster, 2000) chronicles a life filled with incomparable athletic achievements, government-sanctioned discrimination and wasted opportunities. Mischievous, overly generous, prone to alcoholism and habitually restless, Thorpe gained prominence on the gridiron at the Carlisle Indian Industrial School, an Indian boarding school where the half-Caucasian, half-Indian halfback played for legendary coach Pop Warner. He exploded into public consciousness in 1912, leading Carlisle to a national championship and winning gold medals in the pentathlon and decathlon in the Olympics. Controversy arose, however, as a prior dalliance in professional baseball would result in his medals being stripped (a lifelong struggle to restore them ensued, though they would not be returned until decades after his death). Stints as a professional baseball and football player followed, but Thorpe’s poor fielding precluded stardom in the former, while the latter’s nascent status resulted in less-lucrative opportunities than his talents warranted. After his prodigious athletic gifts deteriorated, he constantly struggled with marital problems, finding work and fiscal insolvency. The 1951 movie Jim Thorpe—All American immortalized him, though when he died two years later, more than four years passed before his remains were laid to rest in the newly christened Jim Thorpe, Pa.—a result of family, community and government squabbles. Buford’s attention to detail is largely a strength, but it occasionally breeds long stretches in which the minutiae of Thorpe’s endless cycle of hopeful new beginnings followed by failures to capitalize obscure the narrative core—the tragedy of a groundbreaking athlete succumbing to obstacles both external (and unjust) and internal (and self-inflicted).