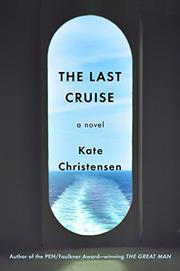 Christensen (How to Cook a Moose, 2015, etc.) chronicles the intersecting human tragicomedies above- and belowdeck during a luxury liner’s farewell Hawaiian cruise.

Commissioned back in 1953, the Queen Isabella has had a long sea life. But now the corporate owners have arranged her farewell adults-only cruise with a glamorous mid-20th-century retro theme. In fact, the Queen Isabella is a little too retro, with drab '70s-era staterooms and a pool considered tiny by today’s standards. Christensen writes with tenderness but no sentimentality about the old ship and about aging human characters, too. Having played together for more than 40 years, the elderly members of the Sabra String Quartet—Miriam; Isaac, her co-founder and ex-husband; Jakov; and Sasha, “the one she’d always had a crush on”—know they are nearing the end of their run. Based in Israel, the quartet is aboard to debut a work called “The Six Day War” composed by fellow passenger Rivka Weiss, whose wealthy husband owns a share in the ship. Crotchety and kind, sometimes both at once, Miriam is the novel’s strongest character, expressing the quicksilver nature of human emotions: Even as her passion for Sasha re-erupts into a full-blown septuagenarian love affair, she finds herself distracted by her scratchy yet deep familial love for Isaac. Miriam befriends 36-year-old Christine, a hardworking Maine farmer’s wife whose successful journalist friend Valerie is on a working vacation. Luxuriating in food, drink, and warm weather, Christine re-examines her life choices while Valerie, who’s paying for their room, tries gathering information on the ship’s uncooperative crew for her “book about workers.” Belowdeck, executive sous chef Mick is caught between his sense of professional duty and a multicultural staff in revolt against horrible working conditions. Then the ship’s engines fail, along with its electricity and plumbing. While Miriam dryly jokes about icebergs, what’s begun as an idyll at sea, at least for the passengers, becomes a crisis. Soon divisions between decks blur and relationships reconfigure.

An entertaining mashup of Ship of Fools and Titanic.