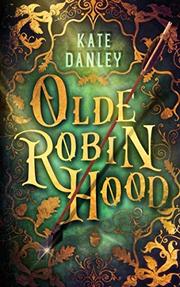 This epic fantasy retelling of a classic story delivers characters both new and familiar.

Danley’s (A Spirited Manor, 2018, etc.) tale has a mythic bent from the beginning, as the corrupt sheriff of Nottingham murders Robin Hood’s father and burns their family farm to the ground. This episode invokes the idea of the monomyth (and a call to action, especially for the farm boy). From there, the story hits familiar beats but keeps them fresh with information from folktales and oral traditions apparently pre-dating the Robin Hood mythos of modern popular culture. Exiled, Robin escapes to Sherwood Forest, where he meets Little John (fleeing the sheriff’s service). The two become friends and join forces with others, adopting a moral code even as they turn to highway robbery to survive. Interestingly, this code is less contingent on their targets’ wealth than their honesty, as Robin and his companions visit justice on only those who lie when asked if they have money. Rather than resorting to violent acts, they have a strict rule against killing and, in fact, invite some weary travelers to join them in their feasts. Further, Robin renounces Christianity early in the story, seeing clergymen as another aspect of the corrupt state, preying on the downtrodden and coveting riches beyond their needs. This stance—as well as the fact that Robin is neither a nobleman nor a loyalist to an absent king, as in some adaptations—sets Danley’s protagonist apart from the simplicity of the morality plays the character often stars in and introduces pagan religion and a philosophy akin to political anarchism, with its strong opposition to unjust hierarchies. Some readers may find that these elements fail to breathe new life into the tale’s well-trod ground, especially as the plot proceeds. Robin (now beloved by the poor) is pitted against an increasingly irate sheriff, forcing the hero to use only his wits and skills to save his friend and lady love. The bones of the narrative are familiar (Little John says of Robin: “He gets one taste of treating folks with kindness, and it is like a thirst that is never quenched”). But the classic story endures for a reason, and many readers will likely find themselves intrigued and entertained by the novel’s rich prose, intense action, historical and mythological depth, and captivating innovations.

A tried-and-true heroic tale made fresh with novelty and well-researched details.