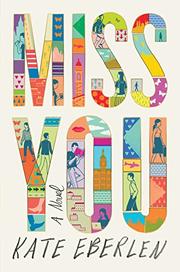 Have you ever caught a stranger's eye for a moment too long and wondered, "what if?"

In 1997, 18-year-old Tess and her best friend, Doll, are in Florence, Italy, the summer before Tess is supposed to begin university in London. She first encounters the lanky, disheveled Gus when they both wander inside a quiet church. By chance, Tess and Doll see him again on the Ponte Vecchio, where Gus takes a picture for them—but then they’re gone. That momentary connection is all that binds these two together as life hands them obstacles and heartbreaks separately. Gus must deal with the guilt he feels over his older brother's death in a skiing accident and grabs the chance to reinvent himself at school with a new girlfriend, Lucy, who knows nothing of his past. Tess returns from Italy to the realization that her mother is not only sick, but dying. Who will care for her unusual baby sister, Hope? For Tess, it means forgoing her spot at the same university where Gus is starting over. Debut novelist Eberlen develops two wonderfully distinct storylines, but her characters are carefully connected by proximity and circumstance. It’s as if their shadows are moving in sync from opposite sides of a screen. For readers who like their romance to simmer throughout a story, be warned that Eberlen deals more in missed chances: "In front of me, there was a tall woman with a fidgety little girl in one hand"—if only Tess had turned around. We instead have the pleasure of getting to know Gus and Tess completely before they truly meet each other. It’s a bittersweet moment when their timelines finally converge years later, as there isn’t much time before Eberlen lets the curtain fall. Though at that point it’s already clear: “Sometimes the best things are staring you right in the face, know what I mean?”