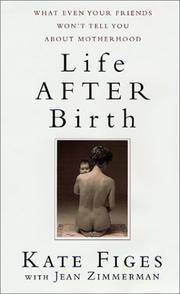 What Even Your Friends Won’t Tell You About Motherhood

by Kate Figes with Jean Zimmerman

A reassuringly frank look at childbirth and motherhood by a writer and mother who persuasively suggests that, despite current conventional wisdom, having a baby does radically change a woman’s body and her life.

Drawing on her own experiences and those of others, as well as numerous studies and past practices, Figes (Because of her Sex, not reviewed) offers insights that inform and comfort. Describing the changing attitudes to children and motherhood, she notes that the view of the mother as solely responsible for her child’s well-being is a recent development, traceable to Rousseau’s Emile (1762). During the 20th century this notion expanded as birth control cut the size of families and as maternal health improved. Today mothers are considered responsible not only for their children’s physical well-being but for their emotional and intellectual development as well—and current child-centered notions of “good” motherhood are bound to wear out anyone who tries to satisfy all these unrealistic demands. The author notes how pregnancy and childbirth can cause long-lasting backache, incontinence, and depression. She also describes how, until recently, it was the universal custom for new mothers to enjoy a recovery period during which relatives and neighbors took care of their households and the new baby. Women have always worked, she observes, but they did not have to deal with the “huge cultural changes in the expectations of mothers and in the nature of work that has made it increasingly hard for women to feel as if they are good mothers when paradoxically they have probably never done a better job.” And she describes the overwhelming love most women feel for their children—an emotion that causes all sort of conflicts and concerns when they go back to work or leave the child with a sitter for a much-needed weekend away.

Sensible and sensitive: a must read for every new mother.