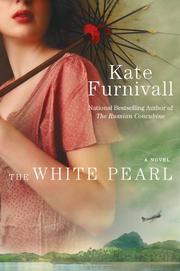 An English matron flees the Japanese with her family, in Furnivall’s ripping World War II yarn.

Connie, wife of Nigel Hadley, owner of a thriving rubber plantation in Malaya, is on her way to the country club when she loses control of her car and rams into a native market stand. A Malay woman, Sai-Ru, is fatally injured, and as her daughter Maya and Connie kneel beside her, Sai-Ru curses “the white lady.” This only adds to Connie’s burden of guilt—her recent affair with a Japanese man ended with his suicide. Nigel, a stereotypical stiff-upper-lipped Englishman, has rebuffed his wife’s affections for years. When Connie tries to make amends by employing Maya and her twin brother Razak, Nigel warms to Razak but banishes Maya, whom he’s seen working in a seedy nightclub. When the Japanese invade Malaya the English colonials are woefully unprepared, and British defenses quickly crumble. The Hadleys flee on their yacht, The White Pearl, with fellow refugees, including their son Teddy, wounded Brit flyboy Johnnie, stowaways Maya and Razak, friends Henry and Harriet Court, and, later, Madoc and Kitty, owners of a gambling den destroyed when a deal with the Japanese went south. Skippering is mysterious seafarer Mr. Fitzpayne, who, when safe harbor in Singapore is impossible, leads the group on a search for a small island on which to wait out the war. Although outwardly grateful to Connie, Maya seeks ways to carry out Sai-Ru’s curse: Harriet ingests poison meant for Connie, and an attempt to drown the family dog will alter everyone's fate. Madoc plots to shanghai The White Pearl, 7-year-old Teddy grows up speedily and Nigel is exhibiting an unhealthy fondness for handsome Razak, which, Connie realizes, explains his coldness toward her. However, even as she recognizes his dangerous depths, Connie cannot deny her attraction to Fitzpayne.